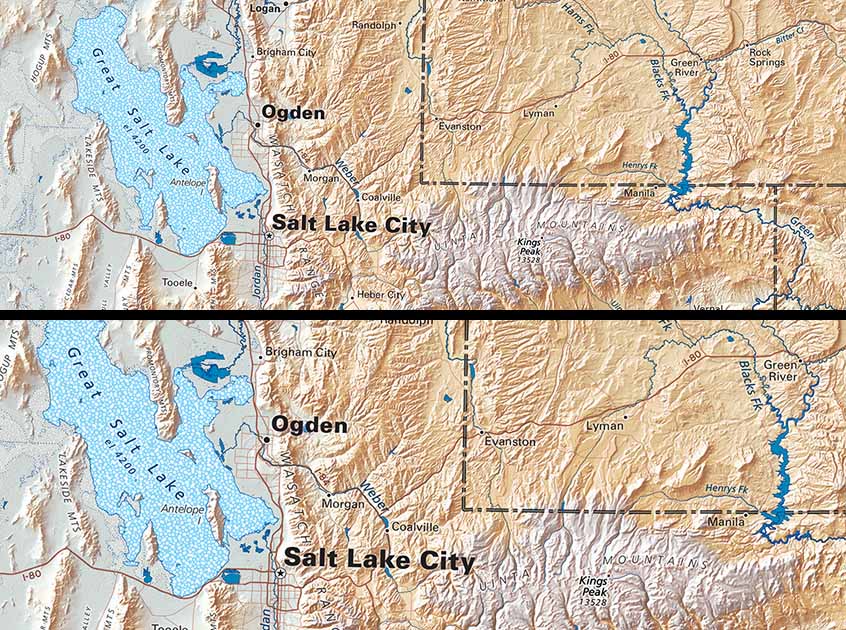 Raven introduced a multi-state Regional map series over the past year. The idea was to go beyond traditional "island map" state format, at a standard scale and a size that's easier to find room for on a wall. Sizes mostly range from 19" x 30" to 32" x 38", with the West Coast and East Coast maps being slightly longer. The series works well, so we decided to add a large-format version, and these are now available.

That larger set raised the question: should we simply enlarge the existing maps, or take advantage of the larger size to add additional content, naming more towns and streams? It's easier to just enlarge, but in the end we decided that, for these maps at least, it's also better.

For readers who find the question interesting, here's how we got there. This will take a while, so you might want to get a cup of coffee.

The enlarged Regional maps are almost half-again as large as the originals. They have exactly the same content, but are easier to read from a distance.

Every map has to balance size ("format") and content density (how much information can be presented clearly and legibly). A larger sheet will accommodate more information, of course, but it's hard to find wall space for a really big map.

Size is a limiting factor in design as well. While a large map has room for a virtually unlimited amount of detail, it can be viewed as a whole only from a distance of at least several feet. At that distance, the most important content has to be large to be legible.

Large type sets off cascading design requirements. An important city (Louisville, for example) needs to stand out from its smaller neighbors, but that necessarily large type takes up a lot of the room that labeling Louisville's very numerous nearby suburbs would require. How do we justify leaving most of them unidentified, while much smaller towns in rural areas are included?

Maps traditionally shoe-horned the small names in anyway. The best examples could be masterpieces of type placement, but they often became maps of names. They were fine for showing all the villages near a town, but you couldn't see the forest for the trees.

And, it gets even worse. The maps couldn't show much additional information, like mountains, valleys, or legible rivers. They were hard-pressed to show legible roads, and the more comprehensive the road network, the less readable the map became. When printed maps were the only source of detailed information, there was little alternative, and cartographers had to make the best of it in an often frustrating, even exasperating trade.

On-line maps have changed the situation entirely. You can now look up any place at nearly any scale - an entire country, a state, zooming in closer and closer, a town, a neighborhood - every street name, every address! Detail increases as the field of view gets smaller, legibility is always maintained - wonderful!

You cannot, however, get much of an overview. On-screen type has to be big, so looking closely means looking at a small area. Readability (of names of roads) is the essential  standard, so background information must be limited. These design imperatives give us very good mapping. The best on-line maps are supremely useful. Like Google or other on-line fact providers, they are fantastic sources of close-up details. But they are not much good at presenting the big picture.

For the big picture, a printed map works best. And, where lines and type are concerned, the simpler the better. Background information can be extremely detailed as long as color and contrast are well-managed. We are all good at making at least some sense of complex patterns, but overlying type and lines scramble those patters, and the denser they are, the more they compromise their own legibility.

So - at last - we come back to Raven's enlarged Regional maps. They have all the same information as the original series, but are easily legible from farther away. Is the map going up behind a chair? Across the room? And, do you prefer to absorb the whole, or do you love to get into the fine details?

If the latter, you might find the enlarged Regional maps not quite as detailed as their size might lead you to expect. If you have wall room and are happy not getting you nose on the map, these are a great answer.