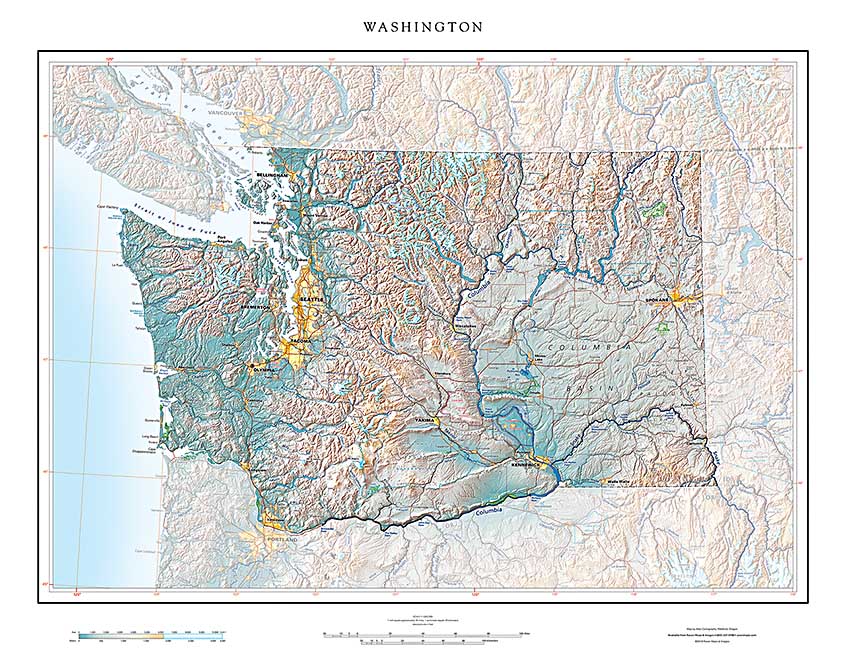 We're pleased to announce the first of our new series of maps: "States in Context". These maps emphasize individual states, but include portions of all neighboring states.

The original Raven series of state maps were "island maps", states floating alone as single images. Those were straightforward to build, and it was easy to identify each state by its iconic shape. You know at a glance what Idaho looks like, although the rectangular shapes of Wyoming and Colorado are easy to confuse. They share a border, however, so you wouldn't be far off!

But that simplicity has a cost. State borders arbitrarily cut off the rest of the world, which of course, does go on.  The island map of Washington , for example (see portion of the map below) gives a fundamentally misleading notion of Northwestern Washington's situation. It does not show immediately adjacent Vancouver BC, Coeur d'Alene, Idaho, or Portland Oregon, or even the Columbia River Gorge or the continuity of the Cascade Range.

The new "States in Context" series makes up for this by including adjacent territories while maintaining each state's recognizable outline by ghosting back the neighboring states/countries. (see below).

The States in Context series also include some new features. We show towns and cities as built-up areas, a more realistic representation that the traditional circle or dot. We include the most important and distinctive federal installations - parks and monuments, wildlife refuges, military bases, as well as Indian reservations. And we emphasize high peaks and ridges by showing them as if snow-covered.

Building any new series is a huge task. The production complexities involved in integrating cross-boundary features makes these maps particularly demanding, but we feel the advantages justify the effort, and hope you agree.

« New Enlarged Versions of the Regional Maps
The Missoula Floods »