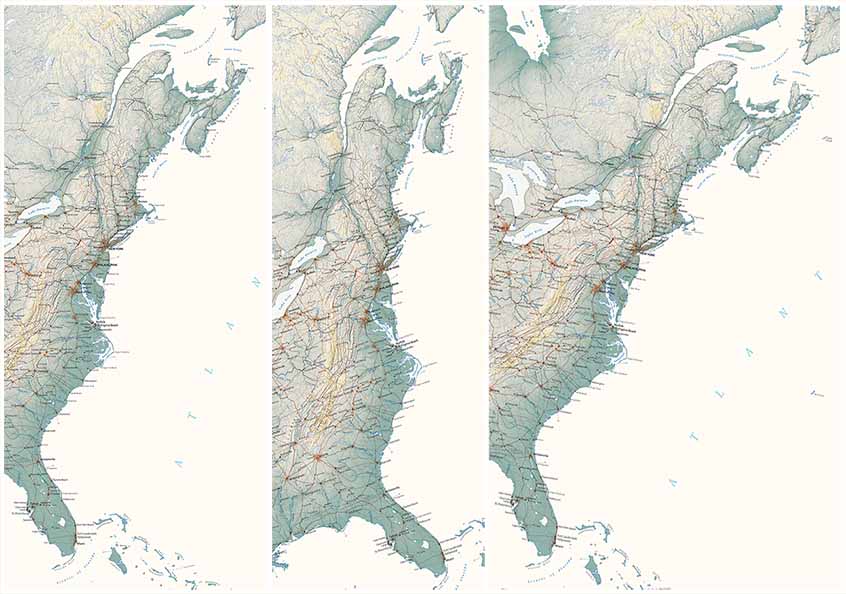 The East Coast is a dramatic but difficult subject for a map. If it is oriented in the conventional "north-up" position, the map includes mostly eastern Canada and the western Atlantic Ocean. We could get rid of the Canada problem by showing only the United States, but dropping the Bahamas and the Maritime Provinces gives a very misleading sense of the Atlantic Coast of North America, and wouldn't eliminate all that ocean.

We chose to sacrifice the north-up convention, but to include the graticule (lines of latitude and longitude) in the ocean as a reminder that the orientation is not standard. We've been wondering ever since whether that's helpful, or does it just make the viewer sea-sick? (The Raven West Coast map has a similar non-standard orientation, but it's a shorter and less complicated shoreline, and that seems to make a difference. We would like very much to hear from you on this. Comments are more than welcome!

Left: The Raven East Coast Regional Map is rotated counter-clockwise about 15 degrees, our compromise between the traditional “north-up” orientation and a reasonably familiar image.

Middle: A further rotation would align the map more closely to the overall trend of the Atlantic Coast and the Appalachians— but at the cost of a puzzling or disorienting image.

Right:  A “north-up" Atlantic Coast looks familiar, but requires a large sheet, most of it mapping the Atlantic Ocean and the interior of Canada rather than the Coast.

Orientation aside, the East Coast presents a striking contrast to the relatively simple arc of the American Pacific Coast . The Atlantic is not one but a long series of arcs, on after another, and complicated (or enriched) by deep bays, what appear as  more or less randomly scattered islands, and assorted spits and promontories.

The bay are largely river valleys carved during glacial maxima when sea level was much lower, then drowned as warming raising it. (Global warming and rising oceans is an old story; the current extent of human reliance on a stable environment is the new one). Islands and promontories vary in origin:Cape Cod and Long Island are glacial moraines, while Nova Scotia, Prince Edward Island, and Newfoundland are pieces of the Appalachian province now isolated by the rising sea.

The Bahamas can be thought of as near-Floridas, part of the same limestone platform that was eventually breached and eroded by the Gulf Stream. Ocean currents and winds account for the barrier island - persistent sand spits which are reconfigured from time to time by hurricanes.

These thumbnail sketches describe some details, but the overall succession of arcs can be generally explained as the western curving track of the still-expanding Atlantic Plate. (The corresponding eastern edge can be seen in the northwestern bulge of Africa). This plate movement accounts for the Appalachians. Their erosional sediments make up the Atlantic coastal plain, where regional uplifting and down-warping further modifies the shape of the coastline.

The region shown on this map has played the dominant role in the European settlement of northern North America (the Caribbean and Mexico to the south were more important for at least the first two hundred years). From the earliest cod fisheries (well before Columbus) and then the fur trade, the north Atlantic coast became vitally important to European trade. The central and southern coast promised fortunes to investors in the plantation economy (first pioneered by the Portuguese and Spanish off Africa, producing tropical and sub-tropical crops with African slave labor).  Both economic strands brought the steady stream of European settlement, transforming the continent.

From the standpoint of American history, this is the heartland from which the United States emerged.