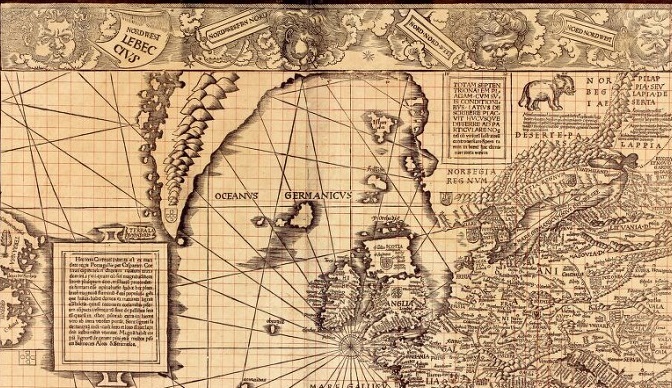 Why, It's Almost Art!

The distinction between art and craft has been worried over for centuries, but seldom in connection with cartography. Map making's origins lie in tax collection and warfare, so the severely practical has always dominated.

It's worth remembering, though, that the European high art tradition developed largely out of decoration on cabinet work for churches. Most of it was no doubt very ordinary, but the best work stood out, and inspired more good work; at some point, the craftsman became the artist. A  "commercial artist", of course, is working for hire to produce a carefully specified product according to well-understood conventions.

The urge to represent and preserve ideas of important people (both actual and imaginary) is probably the other most important source of artistic tradition. Again, a lot of subdividing early work (and late work, too) is routine and pedestrian. The best of it is alive and inspiring after centuries and even millennia.

A similar section of our Physical Map of the World

So, yes, of course, cartography is a craft, and, at its best, also an art. It operates within narrower constraints than contemporary fine art, which can be anything at all that the artist can imagine and make (or, at the moment, arrange). But those constraints are also liberating: cartographers work with the world as it exists, fine artists within the universe/prisons of their minds.

There's a lot to be said for both variants, but the price for cartography is much lower!