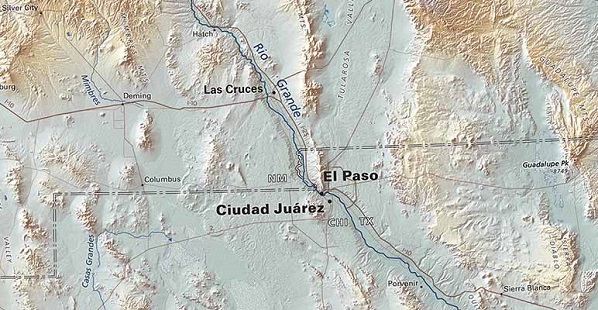 All geographic regions (apart from islands) are to some extent arbitrarily defined. The problem is compounded by the rectangular formats that confine all maps. One can get around this limitation by mapping on a globe, but physical globes are limited to very small scales, unless you’re a billionaire with an aircraft hangar to spare.

If you are, we invite you to get in touch— there are some interesting possibilities. But, the rest of us are stuck with rectangles. That pretty well guarantees that any regional map is going to include some areas that don’t seem to belong with the title. That’s not all bad: seeing what does NOT seem to fit within a region is a reminder of what that region’s defining characteristics are.

A region as vast as the Great Plains requires either a very large map or subdivisions, the more practical solution. Raven’s SOUTHERN PLAINS and Rio Grande Basin is the first of three sheets that are centered on the plains.

THE CENTRAL PLAINS & PRAIRIE and THE NORTHERN PLAINS & Upper Missouri River will follow in the next couple of months. Our GREAT LAKES map also includes some of the region, and so does our NORTHERN ROCKIES (due out this summer)— we are strong believers in overlap. We are including the Arkansas River in both the Southern and the Central sheets.

The Rio Grande flows through the the south end of the Plains (but is not the regional boundary, just the international border). The timbered country of East Texas and the Ouachita Mountains and Ozark Plateau mark its eastern edge. Those central low mountains are the exception; for the most part the landforms we show on these maps are less important in defining eastern limits of the region than climate (and therefore the western limits of forest and woodland, and then the transition from tall grass prairie and then to the drier short grass plains).

Mountains mark the clearer western limits all the way from Monterrey to Edmonton. “Clearer” is not to say definitive. The Hill Country and the Caprock Escarpment in Texas are hardly Plains-like, but they might be termed interruptions, not limits. (In the Central and Northern Plains the Black Hills are a similar exception, as are the Wisconsin Driftless Area and the string of low glacial “mountains” west of Lake Winnipeg).

Note the drainage pattern above

An interesting feature of the Southern Plains is the widely repeated pattern of drainage. The Arkansas, Canadian, Pecos and Rio Grande all emerge from the mountains on north-to-south courses, then swing east, and finally south and southeast, more less in parallel.

The smaller rivers, rising on the high plains, often wander a bit more in their upper reaches but wind up following the prevailing pattern. One could characterize the southern plains as the region of notably long parallel southeasterly streams.

If you’re lucky enough to have an airline window seat on a southern transcontinental flight, that pattern is one more thing to look for.