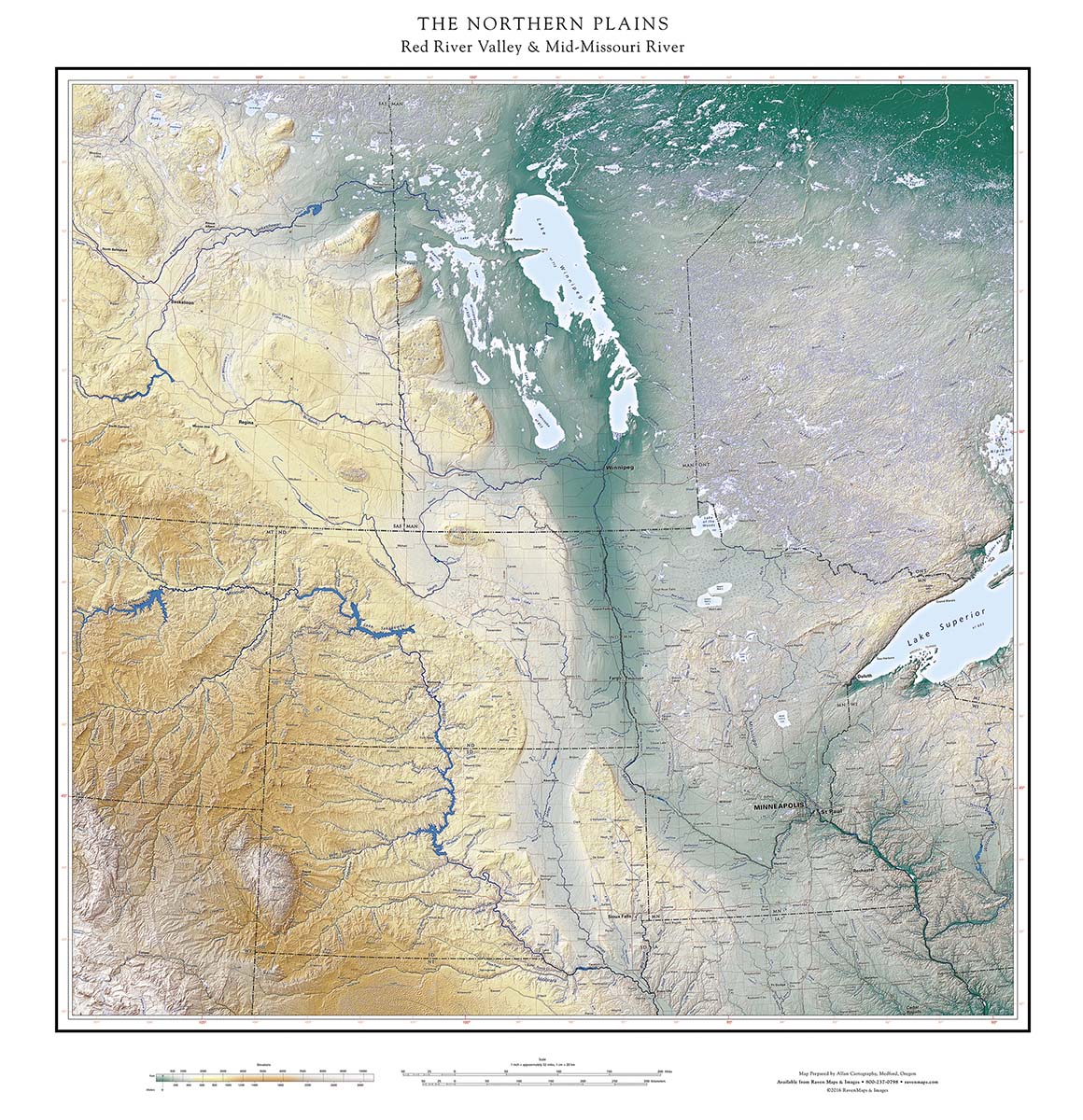 The Dakotas and Minnesota are rarely thought of as topographically dramatic. The Black Hills of South Dakota are an exception. They are impressive as the easternmost outlier of the Rockies, and as the first high and forested terrain encountered by travelers from the mid-continent.

Regionally unique and accordingly important as a summer refuge from the heat of the Plains, the Black Hills are an easy- to-spot image from space, since their dark forests stand out against the surrounding grasslands. Still, in the mountainous West they amount to a footnote. The balance of the region shows up on most maps as monotonously level. That first impression is misleading.

The most impressive features of the northern plains are locally subtle, but vast in their extent and vivid as evidence of the recent past. The Raven Northern Plains Red River Valley & Upper Missouri River map shows the sweeping and dramatic characteristics of the region at the scale required to appreciate them.

The Rocky Mountain piedmont occupies the southwestern third of the map, outlined by the Missouri’s arc from an easterly to a southern course, the legacy of past glacial tongues. The northeastern third of the map is Canadian Shield, the land of a lot more than ten thousand lakes.

Other impressive features of the region are seen in a diagonal band across the middle of the map, recording the post-glacial transformation of the landscape. The north-south trough of the Red River Valley splits into two branches on either side of the Prairie Coteau (see above), a low upland carved by glacial ice and meltwater. The scale of the two channels is evidence of the enormous volume of water involved: similar bars and channels can be found on any beach, but these are about two hundred miles long. We are looking at the traces of Glacial Lake Agassiz, filled by ice melt late in the Ice Age. Lake Winnipeg and its neighbors are very large lakes, but minor remnants.

The lake at its peak was much larger than the combined Great Lakes are today, and at one stage about 12,000 years ago, drained to the south, cutting the channel now occupied by the Minnesota River. Retreating ice and lower lake levels reversed the flow in the Red River Valley. For the past 5000 years the Red has drained north through Lake Winnipeg and ultimately into Hudson Bay. The Minnesota flows into the Mississippi and the Gulf of Mexico, a local stream occupying the trench made by a continental river. It takes a close look to find the Gulf of Mexico - Hudson Bay drainage divide.

The retreating ice also left the remarkable sequence of glacial debris piles (see above) along the western edge of the central basin, extending from Turtle Mountain on the Canadian border northwest to the edge of this map (and, intermittently, all the way to the Horn Mountains west of Great Slave Lake, over a thousand miles away). This row is unique in the world, testimony to the concentration of most of the world’s ice in North America during the most recent ice age.

« The Northern Rockies and Upper Missouri River
What Do the Colors Represent? »