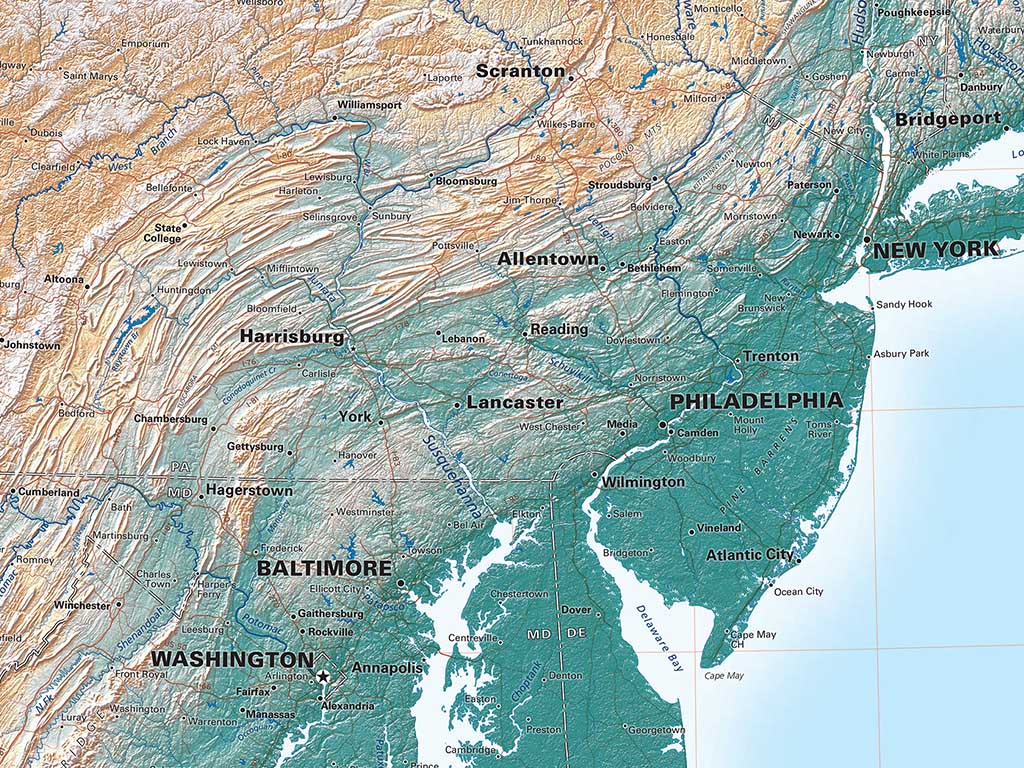 Cape Cod is a notable defining geographic feature, and a logical northern end point for the Mid-Atlantic Coast region. It inconveniently extends so far east, however, that a map including it must either include great expanses of open ocean, or rotate to a southwest - northeast orientation. We tried that, and found the result too disorienting to use. We end the Raven Mid-Atlantic Coast map at the edge of Narraganset Bay, just far enough west to avoid including an odd piece of Cape Cod and sliver of Cape Cod Bay. The annoyance of that visual distraction outweighed the usefulness of a well-known geographic reference.

New England’s early dominance in education has given the North Atlantic Coast a central role in our understanding of American history. In fact, the Mid-Atlantic Coast rose to economic preeminence well before the Revolution. Philadelphia was the metropolis of the American colonies, and Baltimore very important. New York had a fine harbor and the Hudson river gave it much easier access to its immediate hinterland than its rivals had to theirs, but its decisive advantage was its mountain-free route to the interior of the country through the Mohawk River Valley. The Erie Canal and then railroads confirmed New York as the center of the region, while Philadelphia and Baltimore contended with barely navigable rivers and an endless succession of ridges blocking access to the west. The curves of the Appalachian ridge-and-valley province are lovely to contemplate on the map and make for fine scenery but they were hard on commerce.

The southern limit of the Mid Atlantic region in political and economic historical terms would be the Mason-Dixon line, but Virginia and Maryland are firmly within the Mid-Atlantic Region in terms of physical geography, and Chesapeake Bay and the Delmarva Peninsula are central to it. Cape Hatteras would be a convenient southern limit, but that would mean splitting Pamlico Sound. And, we wanted to include all of North Carolina— hence, our ultimate choice of continuing south to below Myrtle Beach.

“But”, you will object, “this map does NOT include all of North Carolina— only its eastern coastal area”. Correct; to get ALL of North Carolina, turn to our SOUTH ATLANTIC map. That includes almost all of the Mid Atlantic Coast Map, but is centered on the Appalachian Mountains and the rivers that drain from them. We originally planned to show the entire region in a single map, but failed in repeated attempts to find a satisfactory single crop.

« THE SOUTH ATLANTIC COAST
Were Those the Days? »