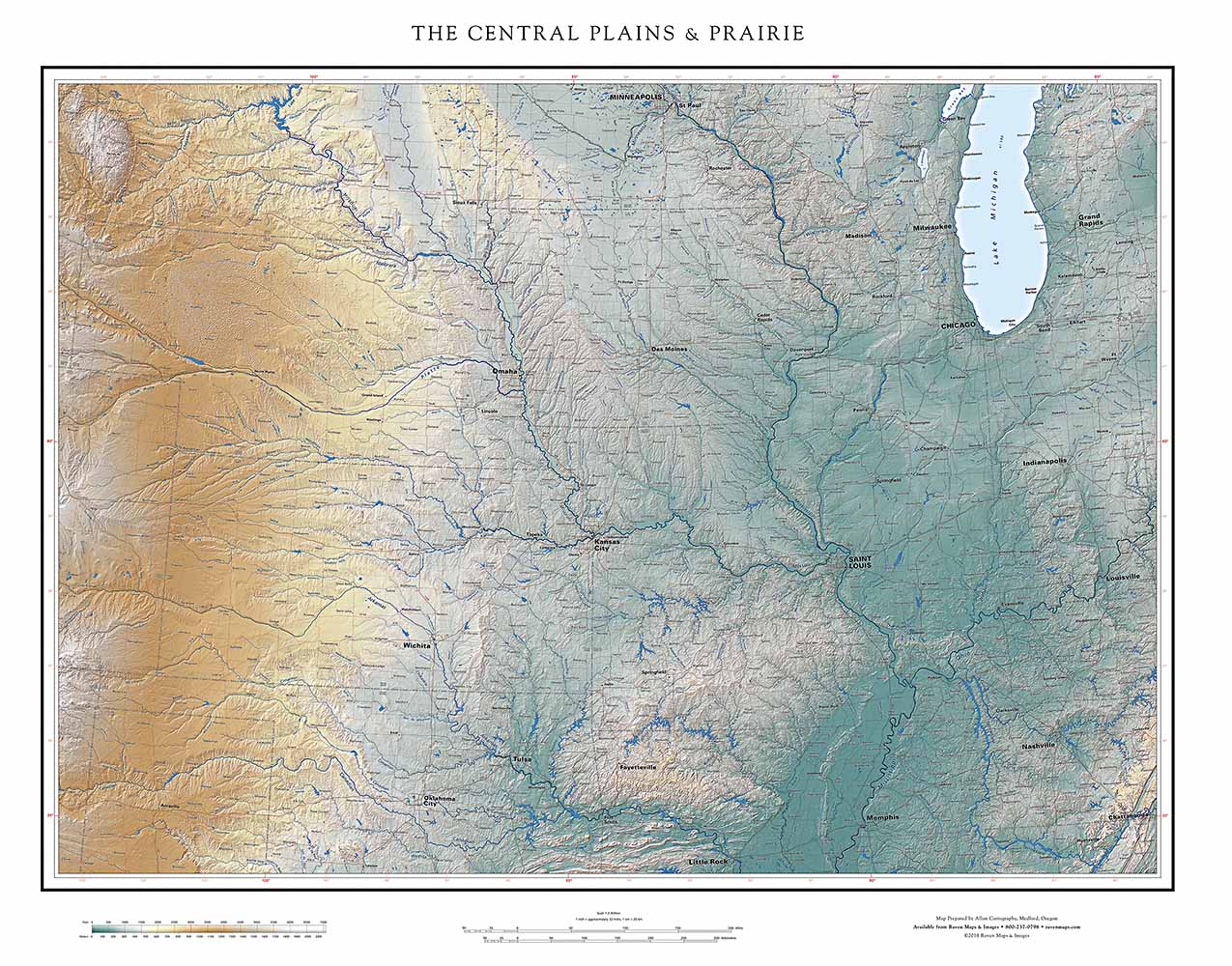 Coastal regions are easily defined, but the Central Plains are trickier.

The Rockies are the obvious western limit. We were tempted to go all the way to the continental divide, but the high Rockies were too distracting, and already covered in full on our Southern Rockies map. In the end we have fallen back on state boundaries. Nebraska is conveniently aligned with the Rocky Mountain piedmont and also with the Black Hills, a defining outlier. In the east, we include all of Indiana (and therefore western Kentucky and Tennessee). Northern and southern boundaries overlap our Great Lakes, Southern Plains, and Gulf Coast maps. If this map doesn’t do justice to your favorite neighborhood, one of those might.

The mid-continent’s reputation for low relief— “it’s so FLAT” is understandable, but misleading. The high country defining the southern limits of the region, the Boston Mountains of Arkansas and the neighboring Ozarks, are indeed relatively low. But the elevation range of the Plains as a whole, from the Rocky Mountains piedmont to the Mississippi, is over 5000 feet. More locally, the St Francois Mountains of southeastern Missouri are 1400 feet above the Mississippi Delta just 70 miles to the east.

Close-up of THE CENTRAL PLAINS & PRAIRIE

The northern portion of the region shows its history of glaciation. The exception is the Driftless Area on either side of the Mississippi, from NW Illinois north. The most recent (Wisconsin) glacial advance divided to the north of that region and bypassed it. Its hills survived, in striking contrast to the recently planed-over terrain surrounding them. The outwash plains of Iowa are, indeed, very flat, allowing the state the highest percentage of tillable farmland in the country. The looping moraines of Illinois and Indiana make for a more varied landscape, their ridges offering views over great expanses of prairie.

This sense of space becomes even more pronounced in the progressively higher plains to the west. This effect is in large part the result of drier, clearer air, but also reflects the long unbroken sweep of the region’s very long rivers. The Niobrara and the Platte are the northern Central Plains tributaries of the Missouri; the Republican and Smokey Hills together form the Kansas.

The Arkansas, the great river of the southwestern Central Plains, swings south around the Flint Hills and the Boston Mountains, and ultimately into our Gulf Coast map.