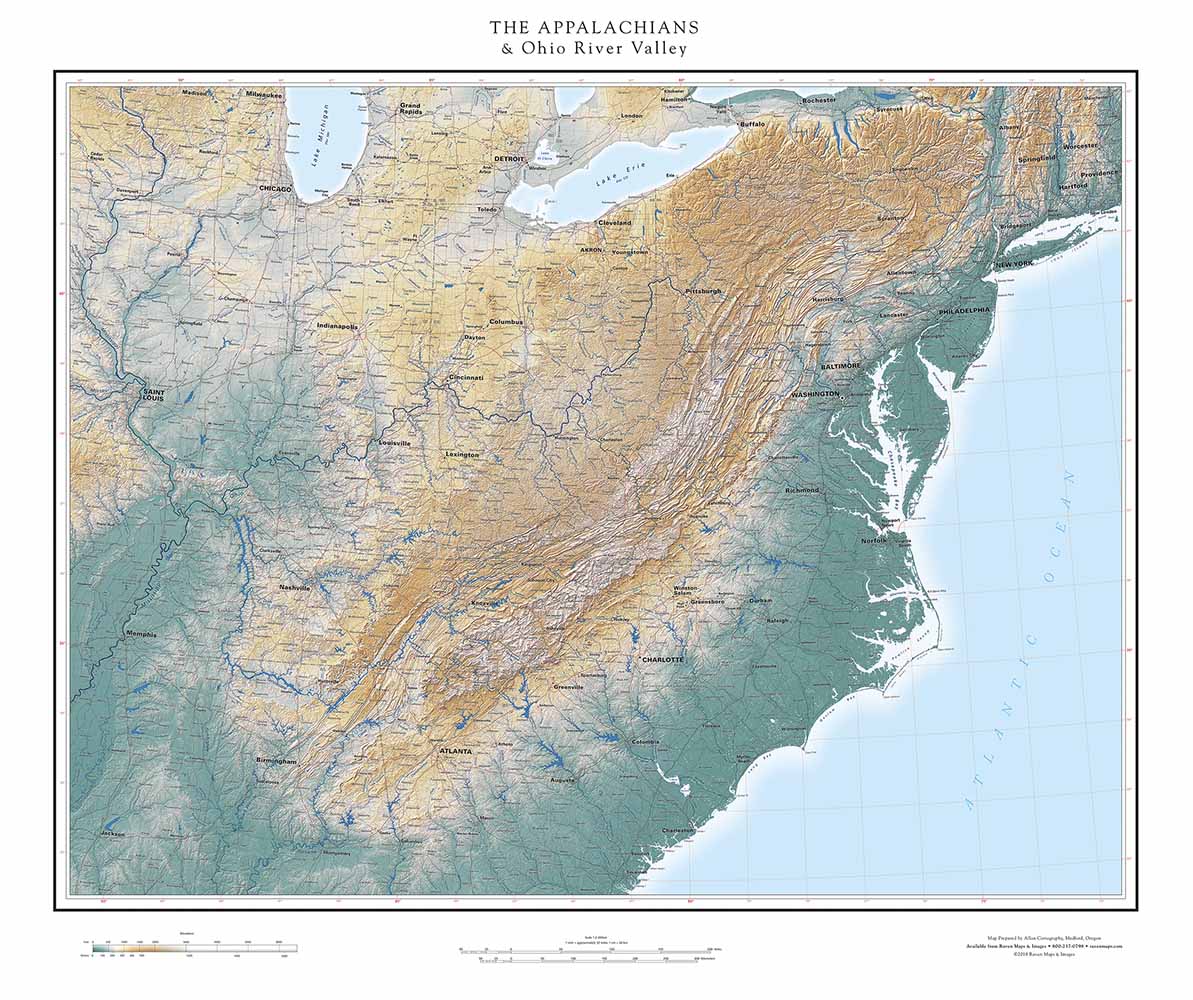 The APPALACHIANS & The Ohio River Valley

The Appalachians are tricky to frame.

They extend so far east that at least some of the coast has to be included. But the coastline, vivid against a pale ocean in this series, demands the viewer’s attention and tends to keep it. Our solution was to crop the map just east of the Hudson River Valley, to minimize that problem as far as possible. The Mohawk River Valley makes a suitable northern limit. (The Appalachians continue all the way to Labrador, speaking geologically and tectonically, but this map reflects the more restricted American understanding of the name).

The dominant shape in the interior is the sinuous trend of the Appalachians, extending from the Hudson River Valley to the outskirts of Birmingham. While the higher ridges are notable on the landscape, perhaps the most striking feature of the Appalachians as a whole is the “Great Valley”— locally, the Tennessee Valley, the Shenandoah Valley, and the Hudson Valley, among many others. Plate tectonic theory suggests that the Appalachians were raised by colliding plates, and the length of the Great Valley speaks of continental-scale forces. An interesting comparison is the much narrower Rocky Mountain Trench, stretching from Montana to the Yukon River in Alaska. That follows a series of obvious faults, but— what drove the faulting over such great distances?

Close up of The Appalachians

Early surveyors had a hard time sorting out the upper reaches of Appalachian rivers, and it’s easy to see why. Neighboring streams which seem to be following the same course suddenly turn and go in opposite directions, and the (present) Atlantic/Gulf divide is, in the southern part of the region, much farther east than expected. Modern mapping faces a different problem: the myriad reservoirs of the Tennessee Valley Authority drown river confluences and make it very difficult to understand their overall pattern. We show reservoirs as little more than wide sections of their rivers, so the drainage network is much easier to grasp. That’s a case of minimizing or even ignoring a detail in order to show clearly a more important larger pattern. That’s a fundamental fact of life in map making.

Rivers both shape and reflect landforms, and the Appalachian region includes wonderful examples. The northern part of the map is dominated by dendritic (“tree-like”) drainage. If you tilt the map counter-clockwise the whole of the middle and upper Ohio system looks a spreading mature broadleaf tree. Some of the east-flowing coastal streams jog repeatedly around ridges punctuated by water gaps, but the general trend is similar. In the south a textbook “trellis” pattern prevails, channeled by ridges that were pushed up faster than those rivers could erode. The two regions are neatly divided by the New River. The New is often described as the oldest river in North America and one of the oldest in the world, based on the ages of the mountain building cycles it has cut through. It has presumably reversed directions, perhaps many times, as successive ancestral Appalachians have risen and then been eroded away.