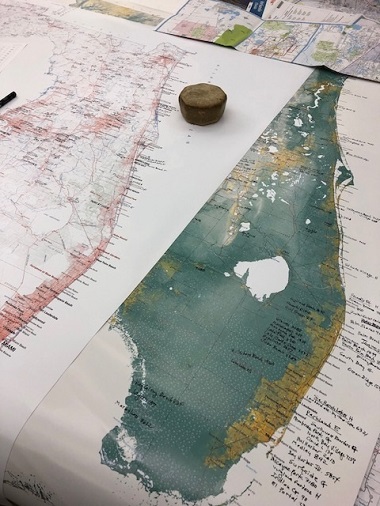 Florida on the Drawing Board

Maps can never show everything, so, what CAN they show clearly? In practice, it comes down to the cartographer’s choices, both graphically and conceptually.

The state of Florida, in production now, poses some especially tricky graphic problems. For one thing, Florida has a lot of very intricate coastline. There are also long smooth stretches, but many are backed by bays and lagoons with countless islets and inlets. The standard coastline representation is a blue line, but in this situation a line wide enough to be legible becomes an illegible tangle. So, we’ve dropped the line altogether, and darkened the low-elevation green. It’s a compromise that works in Florida. (It doesn’t work for the steep-sided fjords of Norway or British Columbia, but, we build one map at a time).

What about Florida’s many many lakes? Those DO get a blue line, partly because they aren’t all at low elevations shown in dark green, and also because their typically smooth shapes don’t pose the same graphic problem. Florida also has vast areas of wetlands, which maps classically show with a blue marsh pattern. That works very well in many places, but in Florida there is so much wetland at dark green (very low) elevations that the standard treatment would make for a gloomy map and hard-to-read type. We reverse the pattern to white instead, and we’re doing the same with rivers and streams and canals, all abundant in Florida.

Florida’s cities pose some conceptual problems. The standard cartographic treatment is a city dot or circle symbol located at an obvious central street intersection or civic center. But rapidly-growing Florida has vast new urban areas with no obvious centers. Do we place a dot in the approximate center of the built-up area, no matter that there is no significant point on the ground there? Or do we emphasize the geographic relationships among neighboring areas, so that A appears west of B, which is south of C, etc.? A great many places are unincorporated, including very large named urbanized areas— do we differentiate those? If we do, what symbols do we use? How do we avoid making the map a complex puzzle?

« Rivers on Maps
Names on Maps »