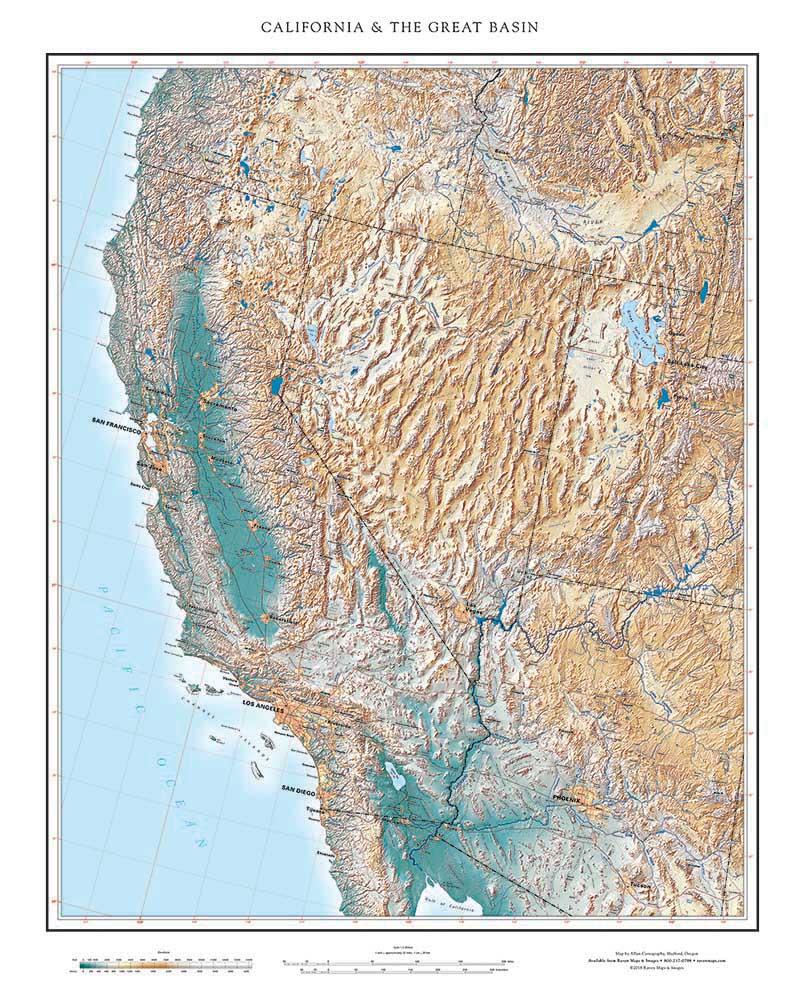 California and The Great Basin covers the vast interior portion of the intermountain West whose rivers and streams do not reach the sea. Southeastern Oregon, Eastern California, most of Nevada, Western Utah and Southeastern Idaho are included, along with small areas of Wyoming. That’s the hydrographic definition, but there are other more expansive ones: the physiographic, anthropological and biogeographical definitions all extend further, especially to the south. The name was coined by John Fremont, who had a gift for naming: he also gave us the "Golden Gate”.

There are other much smaller internally draining basins in Wyoming, as well as in neighboring Canada and Mexico, but the Great Basin is in a class by itself in North America. It covers about 210,000 square miles, about half way between Texas and Montana in size. In the world, only Central Asia's Caspian Depression and Tarim Basin are larger.

Those are both vast more or less single basins. The Great Basin is quite different, notable for its many substantial mountain ranges and great number of entirely separate internal basins. The Great Salt Lake occupies the largest of these but there are other major basins, including Oregon’s Harney Basin, California’s Death Valley, Nevada’s Carson and Humboldt Sinks. The list goes on, and on, with uncountable smaller basins, typically draining into dry lakes (“playas”). Raven’s state maps name many hundreds of the larger ones.

The Great Basin in its present form developed around 2 million years ago, when the rising Sierra Nevada and Cascade Ranges started blocking much of the moisture off the Pacific. Its many internal ranges are largely the product of longer term Basin-and-Range rifting, part of the tectonic process that is producing the Gulf of California.

Its largest lakes and lake beds are remnants of very much larger ones (Lahontan, Manley, Bonneville, and many others) formed about thirty thousand years ago, when melting glaciers fed so much water into the Great Salt Lake that it crested Red Rock Pass in southeastern Idaho and flowed into the Snake/Columbia system. In geological time the Great Basin is brand new and its hydrological definition might almost be called fleeting. In the human time scale, it can be considered eternal.

Geographic definitions should be approached with caution. Maps, however, can be embraced wholeheartedly.

« What Do the Colors Represent?
The Pacific Northwest »